A Little Tour The World Over

Some years ago the American poet H.L. Hix and I had a brief conversation about translating the Turkish poet Ilhan Berk. Now I’m delighted to see our short exchange gathered in a new anthology, editied by H.L. Hix, The World Over: Translators Speak on New Poetry in Translation. The entire book can be downloaded free of charge as a pdf or read online at ESSAY PRESS.

A wonderful companion to The World Over is John Taylor’s A Little Tour through European Poetry (Transaction, 2014), a perceptive collection of essays which includes a piece on some of my recent translations of Turkish women poets, titled “A Panorama of Turkish Love Poetry: Birhan Keskin and Other Contemporary Women Poets”. 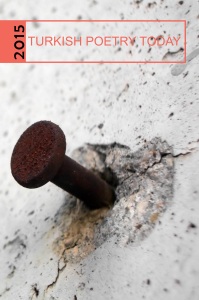 Sky Drifted Over Me

I’m looking at sky coming and going
A stream runs beside me, over its stones
Then suddenly stops as if flowing no more.

I saw water changing shape and form
I saw it in the shape of my hand
I saw it had no form
In its vast history.

So it is I said, rising to leave. Sky dissolving
A horse flicked its tail, a goat stretched out
Step by step on stones I passed the running stream
Then watched the water I‘d pelted with stones.

Sky drifted over me. 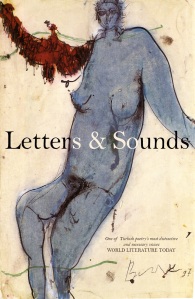 Here is the cover of my new translation of Ilhan Berk’s Letters & Sounds, due out this summer from Red Hand Books. You can read a short blurb and pre-order a copy – if the mood takes you – from the RHB website at www.rhbks.com This is my fourth book-length translation of Berk’s extraordinary poems. A Leaf About to Fall came out with Salt in 2006 and made the shortlist for the 2007 Popescu European Poetry Translation Prize. In 2008 Shearsman published Madrigals, followed in 2009 by my anthology (including work by Ilhan Berk), Ikinci Yeni: The Turkish Avant-Garde, which was also shortlisted for the Popescu Prize in 2011. Again in 2009, Salt published The Book of Things, Berk’s epic poetic trilogy of Things That Are, Things That Aren’t, Long Live Numbers, and House. Berk’s new book, Letters & Sounds, features a stunning cover painting by the man himself.

For more info & to order your copy, go to the newly designed Shearsman website here. 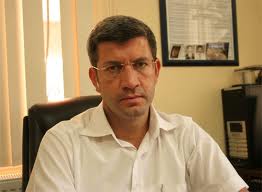 The trial of human rights lawyer, writer and PEN Turkey member Muharrem Erbey is set to resume on 3 February 2014, after the trial against him and 80 other defendants descended into chaos during a 13 January 2014 hearing. PEN International is reiterating its calls for his immediate and unconditional release along with all others who are imprisoned solely for peacefully expressing their views. Read more by going to PEN International

George Messo and his Authors

Here is a very short interview with me talking about translation on the Authors & Translators blog. Click the link for more.

NIGHT LOOKS TO THE EAST

…sentences began with Syrian merchants.
Much later I opened a window facing the river.
A wounded woodcock came in.

I woke to the sounds of rough Latin.

We fell from the middle of a book, medium-sized sentences in search of our place, in a city we didn’t know (for the city’s name was nowhere to be seen) all through the night we wandered. It looked like London, but it wasn’t, that’s for sure; how could we be so sure? Nowhere did the Thames bridges suddenly appear; no Oxford Street, no Hyde Park; it looked like Istanbul but it wasn’t Istanbul; it could have been Venice, Amsterdam, canals everywhere, water, everything living on water, but it wasn’t; maybe Baghdad, Delhi, Peking; the three of us kept our eyes to the floor and didn’t speak; but fireflies, birds, playing cards, ants, suspension bridges, Carthage – yes, Carthage – dinosaurs, dogs, water ways, sewers, water flies and bandages all caught around our ankles and kept stopping us and still we couldn’t find our place on pages.
Maybe our existence was prescribed.
We were cast off.

We were in a Palace of Delights, then moved to a House of Dotage.

I’d undress you.
Your feathery nudity would hit a cloud and stop.
(I couldn’t reach out.)

O word transformers!
You stopped giving news from above.

Sentences are being destroyed…

The world belongs
To ovals and circles!

ILHAN BERK
from The Book of Things (2009), translated by George Messo